Most Requested Video of the Month – How Many Levels Deep is it Legal to Go?

MLMLegal.com’s most requested FAQ this month answered in a video by MLM expert Attorney, Jeff Babener: How Many Level Deep (in the compensation plan) is it Legal to Go?

The issue of depth of levels seemed to be a major focus prior to the internet and other non-postal (mail) means of communication. In the late 1980’s, the U.S. Postal service examined the numbers of compensation plan levels to make a determination, whether or not, in its opinion, the depth of levels created a “lottery” element under U.S. Postal lottery laws, that forbid payment based on chance.

Various cases and consents sorted out a safe harbor (at least from the U.S. Postal Office standpoint) for at least four levels (not necessarily agreed to by the direct selling industry). Separately, the Postal Service looked for evidence of “supervisory requirements.” Most companies adopted specific supervisory requirements of sponsors to demonstrate some managerial activity by distributors. END_OF_DOCUMENT_TOKEN_TO_BE_REPLACED

What does “opportunity” mean in the context of network marketing? Video

You hear it all the time from distributors. “Opportunity.” What opportunity? What are consultants referring to specifically?

Watch the video to see what expert MLM Attorney Jeff Babener has to say.

The word “opportunity” is a generic term for the chance to advance, better one’s economic state, health, social position.

However, in the context of direct selling, “opportunity”, in addition to the chance to make money, is a END_OF_DOCUMENT_TOKEN_TO_BE_REPLACED

New Video: If a Sales Kit or Startup Fee Is Several Hundred Dollars, Then Is This Considered “Frontloading”?

Front loading generally refers to a process in which a MLM company, or a sponsoring distributor, encourages a new distributor to purchase far more product than is commercially reasonable under the circumstances. Often the “push” is explained to the recruit as necessary to qualify in the plan. This is an unacceptable practice is often one indicia of a pyramid scheme.

On the other hand, virtually all regulatory agencies recognize that a purchase of an “at cost” sales kit is an acceptable practice in the mainstream of leading direct selling companies. Such mandated kits are typically in the $50-$100 range. They generally entail “hard copy” or online supply of sales and marketing materials as well as ongoing sales and marketing materials updates for a year. Typically the mandated sales kit does not include product and generally a company offers an optional deluxe kit that may include product. Such an optional kit, which is often referred to as a “fast start” kit, may contain several hundred dollars of product. This is not unusual. Although the same regulatory standards on END_OF_DOCUMENT_TOKEN_TO_BE_REPLACED

The Origin and Operation of the Famous 70% Rule Explained

The 70% rule derives from the 1979 FTC Amway decision in which an administrative law judge recognized that Amway’s 70% rule helped prevent inventory loading (it is not a retailing rule). Basically, the Amway rule provided: at the time of ordering by a distributor, don’t order more inventory unless you have sold or personally used at least 70% of what you have previously ordered. This is one of the Amway “safe harbor” rules that you will see in the policies of leading direct selling companies. END_OF_DOCUMENT_TOKEN_TO_BE_REPLACED

Do you want to see what it’s like to attend the MLM Startup Conference in Las Vegas? Have you ever considered starting your own networking marketing business and get instructed by experts in the direct selling industry? Check out this video by the industry experts, Jeff Babener and Michael Sheffield:

END_OF_DOCUMENT_TOKEN_TO_BE_REPLACED

Take a Look at the Stats from the 84th MLM Conference

The registration for our Oct. 2019 conference was 65 companies and 130 individuals. It was our 84th national conference over 35 years. Here are some examples of companies that Babener & Associates has started at one on one meetings at these conferences or in similar one on one meetings: NuSkin, Melaleuca, Usana, Nikken, Excel Telcom, Team National, Nerium, etc. Other leading companies, who have been provided Babener & Associates advisory, over similar time period: Avon, Amway, Herbalife, Shaklee, ACN, etc.

Here is a glimpse of very attentive entrepreneurs at the 84th MLM Conference: Join us for the next MLM Startup Conference in February. Visit MLMLegal.com.

Posted in MLM | Tagged Conference, mlm, pictures, Startup, Statistics | Comments Off on Take a Look at the Stats from the 84th MLM Conference Posted in MLM | Comments Off on Happy Halloween from Babener & Associates!

By Jeffrey A. Babener

History is Written by the Victor

There is a crack, a crack in everything

It was like the calm of quiet uncertainty before the storm. In May, 2019, 26 year old leading direct selling company, AdvoCare, announced that it would exit MLM in favor of a one level direct sales model. It indicated that it was doing so, and “had no choice,” after confidential talks with the FTC. That was it. No other explanation. And the industry asked: What is this all about? It may be true, as T.S. Elliot said, “the world will end in a whimper, not a bang.” For a detailed article on the May withdrawal and ramifications, see AdvoCare Abandons MLM: Uncertainty Returns to Direct Selling. (World of Direct Selling).

And then, in October 2019, a cacophony, as the other shoe dropped. The FTC announced a stipulated judgment in which AdvoCare was proclaimed online and in newspapers across the country as a pernicious pyramid scheme that had swindled hundreds of thousands.

The settlement came with a $150m fine, life time MLM bans for AdvoCare’s CEO and top distributors, and the FTC spiked the ball in the end zone, noting at its press conference,

Sending an underlined message across the bow of the direct selling industry, the FTC online blog labeled the case as “the landmark settlement.”

An Extraordinary 150 Minute Course with Our Compliments

(**Available only to Executives of MLM Startup and Existing Companies.) 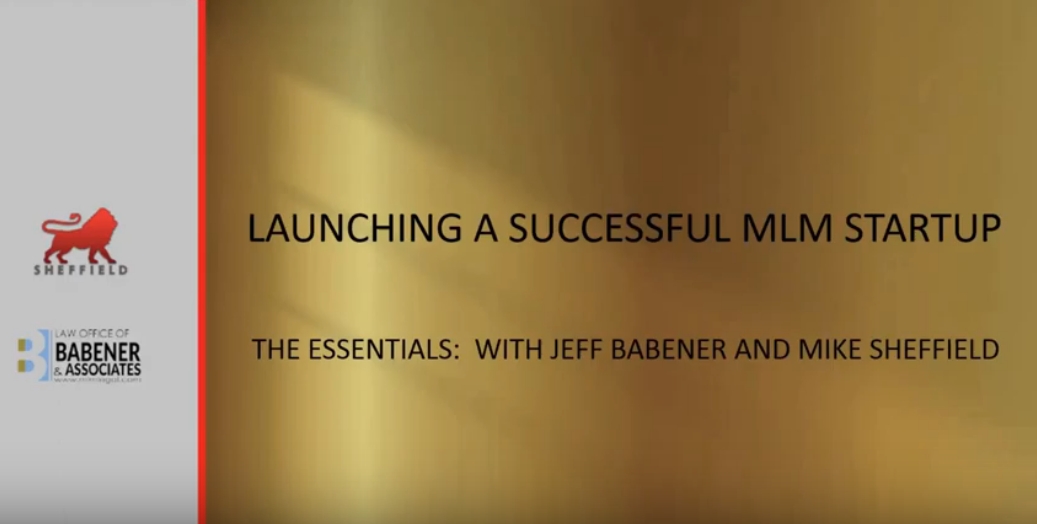 Catch up on the news: DSA Launches Independent Contractor Initiative

By Jeffrey Babener, © 2018
(First Published in World of Direct Selling)

Dateline Maine 1996 for one of America’s leading direct selling companies:

One day you have no presence; the next day you are the largest employer in the state…at least until the state amends its unemployment statute, in 1996, to follow the federal tax definition of independent contractor exemption for direct sellers:

END_OF_DOCUMENT_TOKEN_TO_BE_REPLACED

Posted in MLM | Comments Off on Catch up on the news: DSA Launches Independent Contractor Initiative